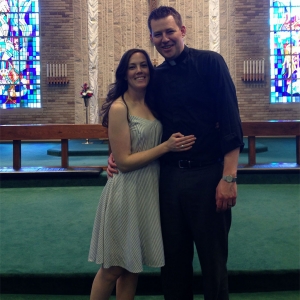 Pastor Voorman was born and raised in Lincoln, Nebraska to Pastor Duane and Pamela Voorman. He has a younger brother, David, and a younger sister, Katie. He attended LCMS schools his entire life, graduating with a B.A. in History from Concordia University in Seward, Nebraska in 2006. While at Concordia, he met his amazing and beautiful wife, Amanda (Hehn) from Fort Collins, Colorado, and they were married in 2007. After graduating from Concordia Seward, Pastor and Amanda moved to Fort Wayne, Indiana where he attended Concordia Theological Seminary, graduating with a Masters of Divinity in 2010. Out of the seminary, Pastor Voorman served as Associate Pastor at Trinity Lutheran Church in Toledo, Ohio before receiving and accepting the call to serve as the Senior Pastor of Zion in 2015.

Pastor and Amanda have two beautiful children, a son Bennett and a daughter Magdalena. They also have a black lab named Lucy. The family loves being here at Zion and in Northeast Indiana. They enjoy spending time as a family and being outside. They also enjoy traveling. Pastor Voorman is an avid Nebraska Cornhusker fan and loves playing and watching sports whenever he gets the chance. Want to know more, track him down and ask him! 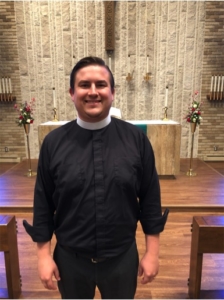 Pastor Oedewaldt was born and raised in San Diego, California. His parents were gracious enough to send him to a Lutheran elementary school, which laid the foundation for his future in the Church. From there, he attended Concordia University in Irvine, CA and graduated with a B.A. in Theology and two minors, one in Philosophy and the other in Global Cultural Studies. Pastor Oedewaldt then attended Concordia Theological Seminary and earned his Masters of Divinity. His vicarage year was spent at Zion Lutheran in Decatur, IN – a congregation who so graciously extended him his first call as their Associate Pastor.

Most importantly, Pastor Oedewaldt met his beautiful and loving wife, Amber, at undergrad. Amber also graduated from Concordia University with a B.A. in Psychology, an Elementary Teaching Credential, and her Lutheran teaching certification. She currently teaches third grade at Holy Cross Lutheran School in Fort Wayne, IN.

Pastor and Amber enjoy many things, such as watching baseball (San Diego Padres) and hockey (Anaheim Ducks) and critiquing movies both new and old. But they really love to travel. They each went on separate study abroad trips while at Concordia University and can check off about 25 or more countries between the two of them. Yet both of them agree that their best trip was the one taken together, their honeymoon in Vienna, Austria. Now both Pastor and Amber are excited to embark on this new adventure in the life of the congregation at Zion Lutheran Church.

No additional detail for this event.